Tramps, The King of Clubs

Its the moment you have been looking forward to all year long, its officially time to say hello to your summer holidays and the Tramps Summer Opening Party.  Dig out your flip flops, put your sunglasses on, rub on the sun cream, put your best shorts/bikini on and get your drinking & dancing head into gear and ascend into Tramps for the best atmospheric party in Tenerife.  Its party time!

Order your favorite cocktails and dance the night away in Tenerifes highest and best reviewed nightclub.

There is no place you would rather be.

Every summer has its own stories.

Tramps Tenerife – The King of Clubs will give you back the cost of your taxi in drinks vouchers up to the value of €10 – Terms and conditions apply.

We do more than anyone and everyone else – More than just a club! 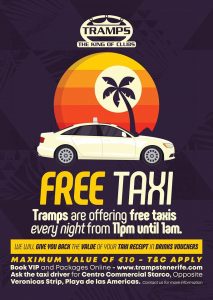